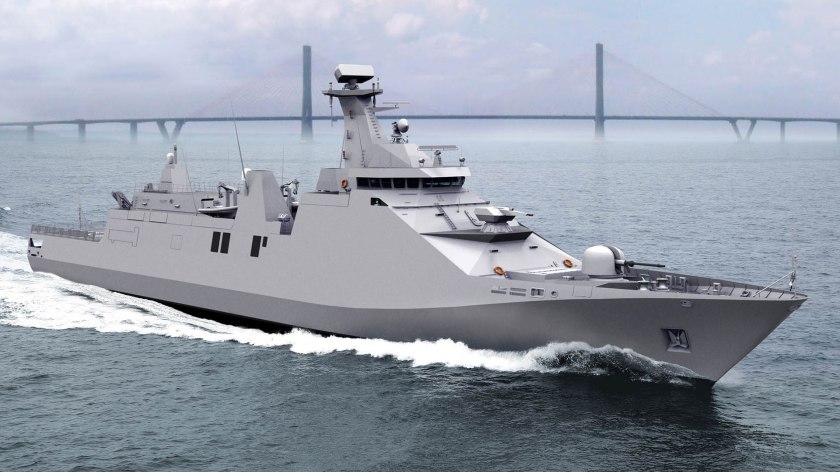 In another departure from regular Land Domain content, this article considers a naval topic that has aroused much recent interest both within and beyond the UK Defence Community: the need for light frigates and corvettes to compensate for a reduced total number of warships. As the UK Ministry of Defence prepares to review bids for its Type 31 frigate requirement, it may be helpful to consider UK requirements in this area by looking back on similar ships produced between 1939 and 1945.

At the beginning of the Second World War, the Royal Navy had 332 warships making it the world’s largest navy. The fleet included 15 battleships, 7 aircraft carriers, 66 cruisers, 184 destroyers, 45 patrol vessels, and 60 submarines. While the size of the Royal Navy’s fleet was a major factor in deterring Hitler’s invasion plans in 1940, the Admiralty realised that it was short of small escort vessels for coastal patrol duties. This led to a requirement for an inexpensive inshore vessel that could be produced quickly in large numbers. It also needed be easy to operate, so it could be crewed by inexperienced sailors. The resulting design, developed by Smith’s Docks in Middlesborough, was based on a pre-war whale catcher and dubbed the Flower-Class corvette. It displaced 940 tonnes, measured 62.5 metres in length, and 10 metres in width. Two oil-fired cylindrical boilers powered a 2,050 Kw steam engine giving the ship a range of 4,650 Nm (6,482 km) at 13 knots. Its top speed of 16 knots (29.6 k/ph) was quite slow relative to larger Navy warships, many of which were capable of 28-30 knots, but it was fast enough to chase a submerged submarine, which typically traveled at around 8 knots (14.9 k/ph).

Almost before the first Flowers began to role down the slipways of sundry British shipyards, it was realised that additional vessels were needed to escort transatlantic convoys. As is so often the case with ships, aircraft and armoured vehicles in time of war, they were pressed into service in a role for which they were not designed. Fortunately, the Flowers were large enough to negotiate Atlantic in mid-winter, although they rolled easily in rough seas which quickly exhausted their crews. 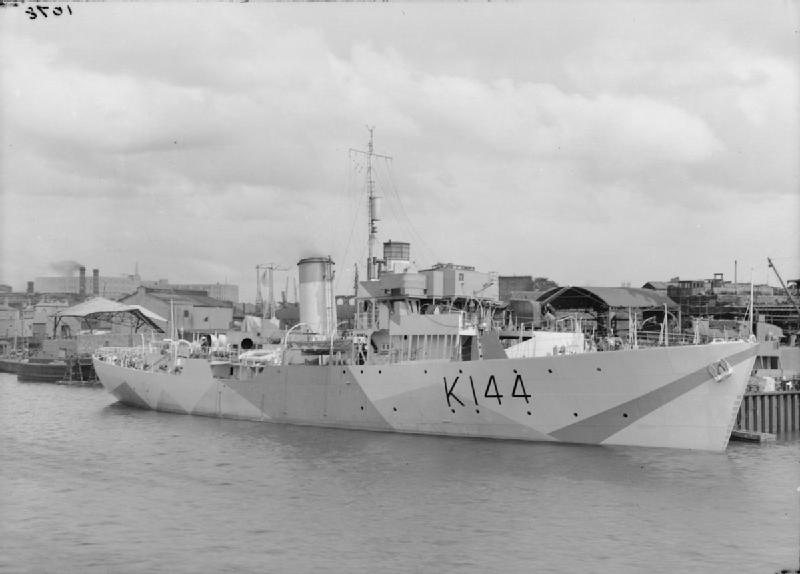 Flower-Class corvettes packed a remarkable punch for such a small warship. A single BL Mk IX 4” naval gun with 100 rounds of ammunition was mounted on the forecastle, four Mk II depth charge dispensers plus 25 depth charges, and twin .303 Lewis guns were mounted aft. The ships were later modified so that they additionally had a 40mm “pom-pom” anti-aircraft gun on a Mk VIII bandstand mount amidships, two Oerlikon 20mm cannons on the bridge, and Hedgehog anti-submarine mortars on the foredeck.

Winning the Battle of the Atlantic required Flowers to be fitted with Type 123 ASDIC sonars for detecting German U-boats. These were placed in dome fixed to the hull about 12 metres from the bow. Early Flower-Class ships had an enclosed wheel house on top of the bridge. This was later changed to an open design for better visibility. Refitted ships added a surface radar mounted in a lantern housing behind the bridge. This became very useful for tracking submarines that followed convoys on the surface.

Initially, Flower-Class vessels had a crew of 47, but this was increased to 85, including five officers. The forecastle of refitted versions was lengthened to add additional accommodation for the extra crew.

A total of 267 Flower Class corvettes were built between 1939 and 1940. They were operated by British, Canadian, French and US navies. Despite a very high number being built, the design constantly evolved throughout the vessel’s service life and it was uncommon for any to be alike in either configuration or appearance.

Between 1939 and 1945, 36 Flower-Class corvettes were lost, of which 22 were torpedoed by enemy U-boats. They accounted for 51 enemy submarines sunk (47 German boats plus 4 Italian). The most successful Royal Navy Flower-Class vessel was HMS Sunflower, which single-handedly sunk U-638 on 5 May 1943 and U-631 on 17 October 1943. It shared in the sinking of a third submarine, U-282, on 29 October 1943. Winston Churchill took great delight in announcing that a Royal Navy vessel with a name that made it sound more like a pleasure cruiser than a warship had sunk three German submarines. 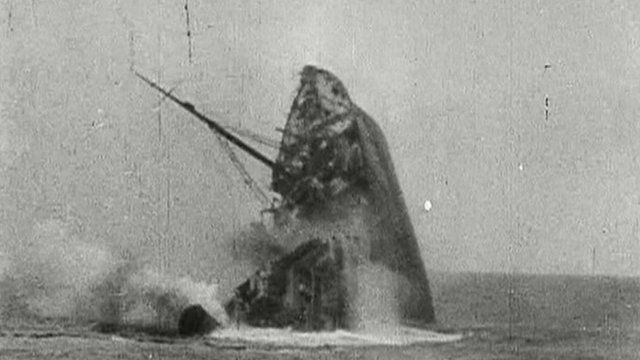 Ultimately, Flower-Class corvettes gave the Royal Navy critical mass at a crucial moment. In doing so, they saved countless lives, millions of tonnes of shipping, and prevented Britain from being starved into surrender. These small corvettes were mediocre ships at best, but they represented almost 50% of total number of allied escort vessels during WW2. The significant contribution made by the Flowers was graphically depicted by the 1952 war film “The Cruel Sea” starring Jack Hawkins and Denholm Elliott. Based on the the novel of the same name by Nicholas Monsarrat, it ranks among the greatest of British war movies.

Nicholas Monsarrat’s book is widely held to be one of the best accounts of the Battle of the North Atlantic.

Actor Jack Hawkins in the film, The Cruel Sea.

Actor Jack Hawkins in the film, The Cruel Sea.

Nicholas Monsarrat’s book is widely held to be one of the best accounts of the Battle of the North Atlantic.

As the war progressed, the operational experience gained by Flower-Class crews provided useful feedback that enabled the Royal Navy to design and build a range of vastly superior frigates and destroyers, such as the River-Class frigate. These vessels displaced 1,390 tonnes, were faster, with greater endurance and improved seakeeping abilities; but their weapons and sensors were similar in capability to those fitted to Flower-Class ships. The Loch-Class frigate, which entered service in 1944, had better weapons and sensors (including the Squid anti-submarine mortar which fired depth charges ahead of the vessel), but by this time, the tide had turned in the North Atlantic. Though unsophisticated, even by 1940 naval standards, Flower-Class corvettes proved to be the right ship at the right time.

Today, Britain has the 5th largest navy behind the USA, Russia, China, and Japan. It currently possesses 74 vessels including 2 aircraft carriers, 6 destroyers, 13 frigates, 11 submarines, 2 commando assault ships, 13 MCM vessels, 22 patrol boats and 5 survey ships. Although today’s Royal Navy warships are much better equipped than their forbears, 19 surface combatants is an extremely low number to fulfil the many roles essential to the United Kingdom’s maritime defence and security. In terms of critical mass, the Royal Navy may now be too small.

With a vastly increased naval threat posed by Russia and China, a major conflict would require Britain to address the same problem it faced at the beginning of WW2: a shortage of ships capable of detecting and destroying submarines. It is unlikely but not impossible that Britain might have to fight a third battle of the North Atlantic. Regardless, the threats we face have evolved and are significant. China has 59 submarines, including the sophisticated Yuan-Class diesel electric boats, while Russia has 58.

The Royal Navy built 16 Duke-Class Type 23 Frigates. Of these, 13 remain in service and they will be replaced by the City-Class Type 26 Frigate or Global Combat Ship from 2023. This new class of ship will be much more capable than the one it replaces. It will have the 997 Artisan 3D search radar and Sea Ceptor (CAMM) as well as a a bow mounted sonar, towed array and Merlin ASW helicopter. Such sophistication comes at a price. Type 26 frigates are expected to cost between £750 million to £1 billion each. For this reason, it was originally planned that the Class would consist of eight anti-submarine frigates, plus five less-expensive general purpose frigates. After the 2010 Strategic Defence & Security Review, it was decided that only 8 Type 26 ASW vessels would be built in total and the general purpose requirement would be met by a new low-cost class of “Light Frigate” to be called Type 31e. This will be “fitted for but not with” anti-submarine sensors and weapons and the target price is £250 million.

Given the extent to which the geopolitical environment has now changed, many naval analysts believe that eight anti-submarine frigates is insufficient. This view has split opinion on what the role of the Type 31e should be. Critics of the programme have suggested that it could end-up being only marginally more capable than the Navy’s nine planned River-Class Offshore Patrol Vessels, which cost around £120 million instead of £250 million. Fundamentally, we may need to redefine the Type 31e’s role and refocus it around anti-submarine warfare. If this is right, perhaps the most sensible option is to revert to the originally planned total of 13 Type 26 global combat ships and to make them all ASW ships?

A second option, could be to develop a contemporary version of the Flower-Class corvette. This would be a low-cost anti-submarine vessel. The term corvette is used here to denote a ship defined by cost not size. Conceptually, this could be a 3,000-4,000 tonne vessel that could be built quickly by a variety of smaller UK shipyards.

In fact, contemporary versions of Flower-Class corvettes already exist. These are the advanced corvette designs developed in recent years by British and European shipyards. Typically, they are around 100 metres in length, have twin 7,000 Kw engines, a top speed of 30 knots, a range of 3,500 Nm, and a 30-day endurance. Modular by design, modern corvettes can be equipped with a variety of weapons, including 76mm or 113mm main guns, vertical launch cells for AA, ASROC and S2S missiles, CIWS for point defence, cannons and ASW helicopters. Bow mounted sonars, towed arrays and powerful radars help them track and engage targets. A large part of the cost is not the ship itself, but the weapons, sensors and other systems that make it credible. The Artisan radar for example is extremely expensive, but it is a less-expensive version of the Sampson system used in Type 45 destroyers. If the weapon and sensors used can be specified according to price, there is no reason why a corvette cannot be both potent and inexpensive.

Slightly larger One element that makes an ASW frigate expensive is ensuring the hull is as quiet to reduce the ship’s own signature and maximise the effectiveness of its bow-mounted sonar. As small unmanned vessels become more capable, there is no reason why advanced anti-submarine equipment could not be mounted in two or three such vessels controlled by a mother ship. The key here is to re-think ASW sensor technology so that it is less expensive without compromising capability.

With a target price of €250 million, versus €1 billion for complex anti-submarine frigates, like FREMM or Type 26, the critical advantage of modern corvettes is affordability.

A few designs are noteworthy:

All displace 3,000-3,700 tonnes, and are around 100 metres in length with a crew of 100. They mount a 76 mm main gun, CIWS, small calibre guns, vertical launch missile pods for short-range air defence, SSM missile launchers, torpedo launchers, hull-mounted sonar, 3D surveillance radar, ESM and a FCS. All can carry a shipboard helicopter. All cost around €250 million per ship.

Any new class of corvette needs to balance affordability with effectiveness. Can it be done? The above designs suggest it can. A fleet of 16-20 corvettes would do much to offset the low number of surface combatants. At £250 million each, it would cost an additional £5 billion to build them. It wouldn’t be the same as having a WW2 fleet of 500 surface combatants, but a fleet of contemporary Flower-Class vessels would do much to enhance the Royal Navy. This number is likely to be unaffordable, but even eight corvettes costing £2 billion in total would would make a difference.

Ultimately, modern corvettes do not need to be a compromise. Modern warships of this type have a crucial difference from those designed in 1939: they are not based on a commercial vessel, but a purpose-designed warship that incorporates the very latest shipboard systems.

Just as the Army recognises that it cannot afford the number of tracked IFVs and wheeled APCs it wants, and so is looking to buy a less expensive armoured vehicle, MRV-P, so the Navy must recognise the same financial constraints and specialty a low-cost light frigate or corvette.

“The dangers of the sea should always take precedence over the violence of the enemy.”