As someone who worked in Advertising for 8 years before becoming a Defence Industry Consultant, I couldn’t let the controversial discussion of the British Army’s new advertising campaign pass without comment. Is it a storm in a teacup or is it an embarrassing misfire? 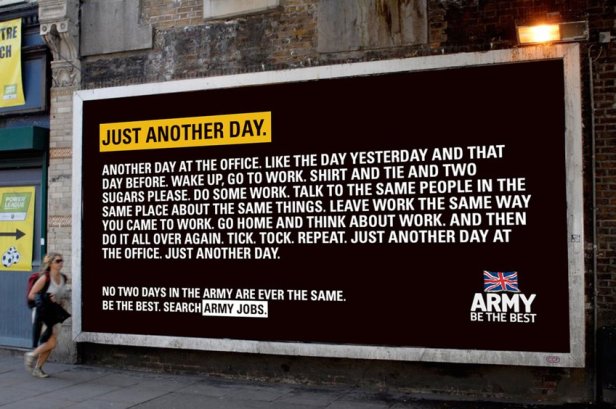 British Army strength is currently around 76,000 soldiers, well below the headcount cap of 82,000. For this reason, it was rightly decided to develop and run a new advertising campaign. Messaging is focused around a revised strategy: “inclusivity” with the first TV spot emphasising the sense of “belonging” that comes from being a soldier. It was bang on target and very much true to the experience of being a soldier, not only today, but something that has resonated with soldiers throughout the Army’s long history.

The second TV spot, just launched, is much more controversial. Echoing the inclusivity strategy, it focuses on the promise of “emotional support’ in a bid to widen the Army’s appeal. It reflects a softer approach that it is hoped will cut across gender and ethnic diversity, while appealing to younger audiences with different values.

During his interview on BBC Radio 4’s Today programme on 10 January 2018, the Chief of the General Staff, General Sir Nick Carter, said that the Army had been forced to into adopting its new inclusivity strategy because its traditional demographic, white male youths aged between 16 and 24, had declined in numbers. However, this appears to be incorrect. Several UK defence correspondents, who have researched the UK’s demographic breakdown, suggest that the Army’s defining target audience has actually grown in size. If this is correct, then it is not the General’s mistake. He has been let down by his advertising agency who should have ensured the communication strategy leveraged an analytical and fact based understanding of target audience segments including triggers and barriers to joining-up.

Regardless of demographic targeting issues, critics of the Army’s campaign have accused it of overweening political correctness and of misrepresenting what the Army is really about. The new ad makes a point of saying that it’s okay to cry, to pray or be gay. But traditionalists, many of whom are ex-soldiers, point out that war fighting is inevitably and invariably a tough and demanding business that requires physical and mental resilience. To dumb down this message or accept recruit candidates who not up to the task could potentially undermine the Army’s combat power.

These may be valid concerns, but actually they fail to get to the heart of the discussion. The Army is no longer talking only to men. While it has unequivocally embraced the LGBT community, they are likely to remain a small minority of total Army numbers. The biggest change to the Army’s demographic composition is its desire to widen its appeal to women, including allowing them to perform combat roles. This will double the size of its addressable target market. There is no question of lowering standards to accommodate women. There doesn’t need to be. Female medics in Afghanistan frequently showed that they were able to carry their own body weight in kit and did so without complaint (while most male only carried 70% of their body weight). Women have shown they can achieve very high standards of physical fitness and that they are mentally every bit as strong as their male military counterparts.

The US Army and US Marine Corps have been hugely successful in integrating women within their ranks. This has not compromised standards but rather made them much more professional and capable in all areas. In particular it has fostered teamwork and… inclusivity. It is absolutely right that the British Army embraces women to the same extent. If this requires a modified communication that reflects their needs and priorities in choosing the Army as a career, then so be it. It will make the Army a better environment as well as improving its combat capabilities.

Unfortunately, there is a further underlying factor that also needs to be considered before planning or implementing any marketing communications. The real elephant in the room is that the Army is broken. Since 2010, it has been cut dramatically and starved of funding. There is no money for training. No money to maintain existing kit properly. New equipment programmes have been delayed or curtailed. Everything is done on a shoestring budget. Army accommodation – a necessary perk given that soldiers are regularly required to deploy for long periods abroad away from their families – is suffering from years of neglect and under-investment. Worst of all, the reduction in headcount has reduced rotation timeframes, meaning that unit deployments abroad occur more frequently. All of these factors have eroded the quality of the Army’s offer. Soldiers are fed-up of being asked to do more and more with less and less. If the Army is simply no longer the career it used to be, then its ability to attract recruits will obviously be diminished. No amount of advertising will change this reality.

Hard evidence of the Army’s declining appeal is not so much its inability to attract new recruits, but experienced soldiers (trained at great expense) leaving in large numbers. It would not be unreasonable to suggest that the Army’s first communication priority should have been to retain the soldiers it already has, before trying to attract new recruits. Such an initiative does not require fancy advertising, but improving the substance of existing soldiers’ military experiences. Given the extent to which the Army has atrophied since 2010, improving pay, living conditions and, above all, their sense of professional fulfilment need to be priorities. Unfortunately, these will require the Ministry of Defence to spend much, much more than the £1.5 million its new advertising campaign is reported to have cost.

It is often said that good advertising only makes a bad product fail faster. When advertising is effective, it makes people buy something; but, should they discover that it doesn’t deliver what it promises, dissatisfaction will rapidly spread the word that it isn’t worth joining-up. Given the large number of recruits who join because of family connections, word of mouth endorsement and criticism are critical factors for recruitment and retention. Marketing strategists everywhere agree that you must always deliver the substance of a brand before you communicate its benefits. The Army, like any other major brand, forgets this at its peril.

The Government’s economic strategy is not popular, but it has been necessary medicine to help the UK economy recover. However, just as the economy began to strengthen, Brexit uncertainty and its impact on $ / £ exchange rates have left the all three Armed Services short of cash to implement their equipment plans. The gap is estimated to be £20 billion over the next decade. Meanwhile, the Government is keen to balance the budget so that it can begin to pay-off a yawning chasm of national debt. None of these factors have helped the Army’s cause, but sooner or later, money will have to be made available to rebuild it. Renewed investment in Manpower, Equipment, Training and Sustainment (METS) will do much to help the Army recover lost ground. Once the UK has a credible Army that is properly resourced, marketing communications will become important. It will be a question of strategy: who do we wish to target and what is the underlying message focus that needs to be conveyed to drive conversion? Secondly it will be a question of execution / creativity: what factual and intangible triggers are the most impactful and persuasive?

Ultimately, all recruitment advertising reflects a number of common themes:
– The opportunity for self-development
– Personal fulfilment
– Belonging to a great and respected organisation
– Being a valued team member
– Following a career that opens other doors when you decide to move on
– Doing a job that makes a difference.

All are components of messaging; it then becomes a question of emphasis. This is about uncovering particular insights about the target audience and using them to address particular triggers and barriers to recruitment. At this point, we should look to the past to see what has worked before. The US Army’s “Be all you can be” is probably the best military recruitment campaign in living memory. It was challenging and aspirational, true to the product and inspiring. This made the promise believable, memorable and actionable. Running for almost 20 years, it was a campaign that stood the test of time. It reflected the fact that the US Army has an outstanding sense of self. It has a well-defined ethos and values. It genuinely helps those who join its ranks to fulfil their potential as soldiers and as people.

The UK’s previous campaign “Be the Best” was very much in the same vein as the US Army’s advertising. Unfortunately, some believe that the British Army is no longer the best, so that the promise now has a hollow ring to it. Whether this observation is valid or not, investing in the British army’s capabilities will certainly improve its image and morale to build a renewed sense of belonging to an organisation that is bigger and greater than any person within it.

The Royal Marines’ recent campaign “It’s a State of Mind” (as well as the Royal Navy’s “Made in the Royal Navy”) show that Britain’s forces can produce excellent advertising.

Based on the principle that being talked about badly is better than not being talked about at all, criticism of the current campaign may be a good thing. It certainly puts the Army under a spotlight and generates discussion. Ultimately, however, any campaign’s value is measured by its effectiveness, the results it achieves.

As this article was being written, fresh rumours of further cuts have surfaced. It is possible that the forthcoming Security and Defence Capability Review will cut the Army to just 70,000. If this happens, the last thing the Army will need to prioritise is spending scarce resources on Advertising.

10 thoughts on “Perspectives on the Army’s New Advertising Campaign”