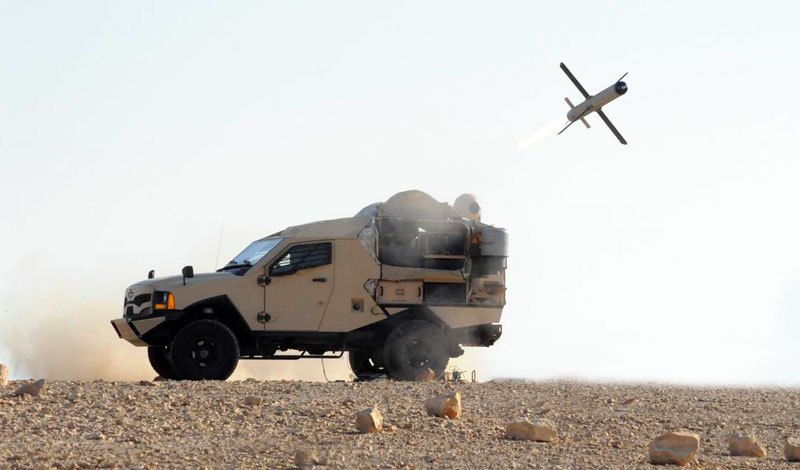 Rafael’s Spike NLOS Mk. 5 (Exactor 2 in UK service) is a new breed of long-range precision-guided weapon that can successfully engage targets at 25-30 kilometres. A key feature is its Non-Line-of-Sight (NLOS) capability. This means that it does not need to see a tank or other ground target to kill it.

The system consists of three elements: missile launcher; fire control unit; and forward operator who passes targets electronically to the fire controller.  The 71 kg Spike NLOS missile can be fitted with a variety of warheads including a tandem shaped-charge anti-armour munition for defeating tanks and a high-explosive fragmentation warhead for destroying buildings, bunkers or groups of insurgents burying IEDs. Guidance is dual-mode incorporating both electro-optical (EO) and Infrared (IR) cameras. The system be operated automatically, which means that the missile independently guides itself to the selected target without interference (fire-and-forget) or it be controlled by a human operator (man-in-the-loop) which enables manual control of the missile. This means the weapon can be re-targeted mid-flight or for the attack can be aborted, which is important given the need to avoid collateral damage.

Operated by the Royal Artillery, Spike NLOS is a transformational new capability. It previews a whole new class of weapons that offer a variety of launch options. The launcher can be mounted on a trailer that’s towed by a 4×4 jeep; on an 8×8 armoured vehicle, like Boxer; or, it can also be air-launched from helicopters and UAVs. The system is light and compact, so transporting it by C-130 / A400M is straightforward. This means it arrives as soon as it is needed, unlike a main battle tank. Spike NLOS proved to be a highly effective asset in Afghanistan and is highly valued by the Army.

One of Spike NLOS’s most significant benefits is that it helps to reduce the dismounted soldier’s weight burden. Instead of carrying heavy missiles for line-of-sight engagements, all that is needed is a laser designator or electronic BMS tablet that can pass reliable target data.

Weapons like Spike NLOS can be expected to become more commonplace. They will also grow in capabilities, such as AI programming that teaches the system to identify certain target types that it then looks for. Long-range precision guided weapons can also be expected to grow in warhead size, range and delivery options. While missiles like Spike NLOS are idea for ground launched anti-tank missions, they are also ideal as anti-ship missiles for naval vessels and shipboard helicopters.

Here’s how precision guided weapons can be utilised:

Imagine a large-scale deployment against a peer enemy. A small four-person Royal Artillery patrol moves deep into enemy-held territory to establish an observation post along an expected line of advance. It digs in, camouflages its position and waits. Patrol members are all lightly equipped, but carry a laser designator, handheld thermal imaging sensors, C4I BMS tablets and secure communications. An Exactor 2 launch system is sited 20 kilometres behind them. Their job is to feed it with targets.

After waiting 48 hours, an enemy tank battalion is spotted two kilometres away. It’s 0300 hours and pitch black. Vehicle coordinates are fed back to the Exactor controllers. A volley of 12 missiles is launched. Each one is given a target. No one in the OP moves. Suddenly, out of nowhere, 12 Spike NLOS Mk 5 missiles simultaneously hit 12 enemy T-72s. The whole area is illuminated as the tanks’ ammunition explodes. The enemy has no idea where the attack came from and no way to return fire. It withdraws rapidly. With the remaining T-72s are no longer clearly visible, a further attack is coordinated. Another 12 missiles are launched but the operators use the missiles on-board sensors to find their targets. Each missile operator is brought-down vertically and penetrates the vehicle through the commander’s hatch. Within 10 minutes of being spotted, an entire tank battalion is rendered inoperative.

The patrol quietly exfiltrates and moves on foot to a new OP position or back to its own forward operating base. It has suffered zero casualties.

A Royal Artillery unit is operating Watchkeeper around 15 kilometres forward over a small town when it spots an what looks like a bunch of antennas sticking out of a building. Unfortunately, there is a kindergarten on one side and hospital on the other. Using other sensors at its disposal, the UAV confirms that it has found an enemy headquarters. Target coordinates are fed to the Exactor battery and two missiles are launched at the building. They enter through the roof and through a back window. The house is wrecked but the school and hospital either side of it are untouched.

An infantry company from one of the Strike Brigades in 16 Boxer MIVs is manoeuvring towards a concentration area where it will join-up with other companies for an attack to seize a hilltop village being used as an artillery OP. It asked for UAV support to ensure its route to the RV point was clear, but no assets were available. Suddenly, it is surprised by a battalion-sized enemy group in BMP 3 IFVs. The Strike units hastily withdraw, but the enemy moves to outflank them. A JFC travelling with the Company Commander immediately requests Exactor support. Given the urgency of the situation, the missiles are launched before individual targets are designated. En route, enemy tanks are identified and assigned to each missile. Minutes later half a dozen enemy IFVs receive a Spike missile through the turret hatch. This immediately stalls the attack. Fortunately, the Boxer MIVs have FGM-148 Javelin missile launchers attached to their vehicles and use these to engage the enemy AFVs, but it is the Spike NLOS missiles that are the force multiplier. By the time a nearby Ajax unit comes to the rescue, the situation is under control, but they use their CT40 cannons to pick-off the remaining BMPs.

The UK Task Force needs to seize a bridge that is a vital crossing point across a wide river. Located 120 kilometres forward, a Parachute Regiment battalion is tasked to assault it at night. After a tough fight, the bridge is captured intact. A defensive perimeter is quickly set-up and the Paras wait to be relieved by an advancing US armoured infantry division, Unfortunately, the lead ABCT is unexpectedly held-up. Realising that the Para battalion can only hold-on for a limited amount of time, the enemy decides to mount a counter attack. First, it softens-up the area with massed fires using tube artillery and BM-21 rocket launchers. This takes a terrible toll, but the Paras are well dug-in using the basements of houses close to the bridge. Next, the enemy launch a brigade-attack to retake the bridge. The JFC requests Exactor support. Because the ground launchers are still 100 kilometres away, a squadron of Wildcat helicopters with Exactor is despatched. From a stand-off distance of 10 kilometres, the squadron destroys some 40 advancing tanks and a number of BMPs. Meanwhile, GMLRS support is added. This further degrades the enemy’s combat capability. Finally, the US Armoured Brigade Combat Team arrives and the enemy retreats while being engaged.

There are undoubtedly many other scenarios where long-range precision guided missiles would come in handy. The point here is that Exactor provides a superb precision capability that’s affordable and dependable: one missile, one tank destroyed. If wars are about attrition of an enemy’s economic power as much their military capabilities, PGMs provide a lot of bang for your buck. They also substitute the need for a tank. Sure, MBTs remain relevant when you need to rout a determined enemy via a deliberate set-piece attack, but what if your MBTs cannot deploy quickly enough?

Rafael, the manufacturer of Spike NLOS, also offers the Spike ER. This is an Extended Range direct line-of-sight ATGM with a range of 8 kilometres. Units equipped with this missile can engage MBTs well beyond their own ability to return fire. It is essentially a more compact version of the UK’s old Swingfire missile. This was mounted on FV432 APCs and on CVR(T) Strikers and used in the overwatch role by armoured regiments. Sadly, this capability was never replaced. Both Spike ER and Spike NLOS would be admirable successors to Swingfire, with latter adding the extra flexibility of NLOS targeting. Presently, the UK’s Exactor systems are operated by the Royal Artillery.  It would be useful to acquire more and to give them to armoured reconnaissance regiments in dedicated overwatch squadrons.

The US Army had intended to field its own Precision Attack Missile System, the Netfires “Missile-in-a-box” XM501 NLOS LS. Co-developed by Lockheed Martin and Raytheon, early tests showed it could achieve a precision kill against moving armour and soft targets at distances of up to 40 kilometres. Like Sea Ceptor / Land Ceptor CAMM, NLOS LS used vertical launch tubes mounted in boxes of 15. So, as well as being an ideal land-based concept, it was also suitable for use at sea and was planned to be used by US Navy Littoral Combat Ships. Unfortunately, NLOS LS was cancelled in 2011. When Putin seized the Crimea in 2014, this focused the minds of military planners everywhere on long-range precision effects. There were many US generals who wanted to re-activate the XM501 NLOS LS Program. The US Army now intends to demonstrate a new Precision Strike Missile (PSM) in 2019. This is likely to be a larger system with a 75-100 kilometres range and, as such, is likely to be much more expensive than Exactor, which seems to strike a happy balance between sophistication, precision and affordability. 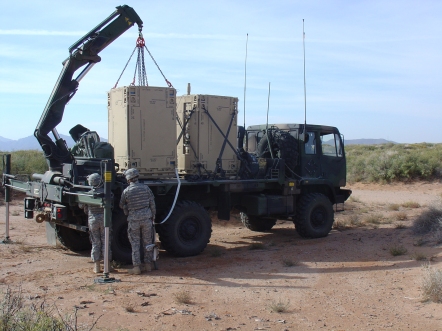 Above: looking like a Portaloo, the US Army’s XM501 NLOS launch system was an interesting attempt to create a Spike NLOS competitor. Sadly, it was cancelled.

Without doubt, long-range precision guided attack missiles with multiple warhead options are an important new complex weapon type. In addition to Exactor, the UK also has Brimstone 2, which is a dual-mode system with a range of 12-20 kilometres (depending on launch vehicle). SPEAR Capability 3 is a similar missile type, but with a larger warhead and 60 kilometre range. In essence, both are mini cruise missiles primarily designed to be launched from aircraft and helicopters, but they could easily be converted for use as ground launch systems. 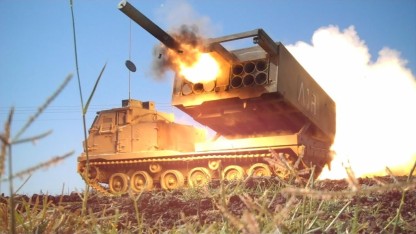 Above left: GMLRS M270 launcher fires up to 12 rockets. Above right: ATACMS fires a single rocket from M270.

We also have GMLRS, which has 70-100 kilometre range. This has two launch boxes, each with six GMLRS rockets, mounted on tracked platform, the M270. It can alternately fire a single, larger ATACMS rocket from each box. Building upon this capability, the US Army recently acquired the HIMARS wheeled platform, which has a single launch box with six rockets instead of the M270’s twelve, so is lighter and more deployable. The UK considered mounting HIMARS on a Supacat platform. The LIMAWS-R used the same GMLRS rockets and launch box. Main Gate approval for LIMAWS-R was expected in 2008, but the Global Financial Crisis meant that it became another much-anticipated and much-needed capability that never saw the light of day. 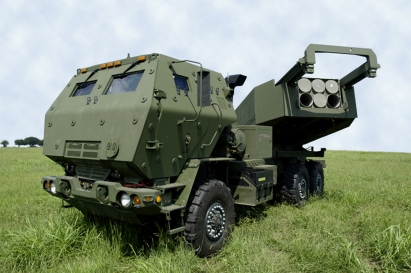 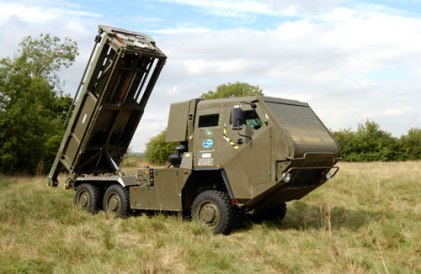 Above left: US Army’s LIMAWS launcher which fires up to six rockets and is fully air transportable. Above right: UK LIMAWS-R system mounts HIMARS on Supacat Coyote-dervied platform. The project fell victim to 2008 global financial crisis.

(Beyond ATACMS, you start to get into Tomahawk TLAM territory.)

While the British Army already has Spike NLOS, the only problem is that it doesn’t have enough. If each UK Strike Brigade has its own 155mm howitzer regiment, plus GMLRS at divisional level this would do much to counter the artillery advantage of potential enemies. But to add further PGMs, like a Spike NLOS battery or ground-launched Brimstone to artillery regiments or cavalry reconnaissance regiments, would help us restore our indirect fires capability.