The case for a new military calibre is a popular but controversial topic that arouses interest and emotion out of all proportion to the importance of small arms within the Army’s overall portfolio of weapons. But, as the US Army begins to formulate a requirement for its Next Generation Small Arms (NGSA) Program and having re-adopted 7.62 mm weapons more widely, it may be relevant to revisit this topic, not least because the UK may decide to adopt whatever new system America chooses.

01 – Military Small Arms Requirements: the need for a systems approach

Perhaps the best place to start any discussion about a new military capability is with the requirement. The focus here is platoon- and section-level small arms and the obvious performance criteria are range and target effect. However, it is important to consider overall system lethality in terms section, platoon and company-level effect. A systems approach to small arms development consists of four key parameters:

Any experienced soldier will say that Shot Placement is the most important of these. Training soldiers to adopt correct fire positions across any situation, to apply the principles of marksmanship under the stress of combat, when tired and or scared, is not easy. Part of it is the muscle memory that comes repeated practice.

The second most important factor is advanced sighting systems. Optical gun sights have done much to improve combat shooting over the last 20 years. The next step is compact Fire Control Systems that combine laser range finders with ballistic computers to automatically adjust the point of aim via an adjustable reticule. The US Army is evaluating these with a view to fielding a system within the next 5-6 years.

In many respects, the x4 and x6 combat gun sights presently in use are superior to the weapons to which they are attached. This being the case, perhaps the time has come to look at both weapon and ammunition design to see what improvements can be made?

Prior to the UK adoption of 5.56 mm, British Army small arms doctrine required riflemen to engage targets individually to a range of 300 metres; sections firing collectively to 600 metres; and light machine gunners to 800 metres. Target effect or lethality was defined by the ability to penetrate a steel helmet at the above ranges. Between 1888 and 1979, these requirements were comfortably  exceeded by Britain’s .303 No.4 Rifle and Bren Light Machine Gun; and later, by the L1A1 Self-Loading Rifle and L7A2 General-Purpose Machine Gun, when 7.62×51 mm ammunition became the first NATO standard calibre. Both ammunition types were effective at more than 1,000 metres.

In 1963, only a few years after 7.62 mm NATO had  been adopted, the US Army decided to field another new rifle, the Armalite M-16. This was chambered to fire a radically smaller high velocity ammunition type: 5.56×45 mm. The decision to adopt this cartridge was driven by a belief that 7.62 mm was much more powerful than necessary. Inspired by two small arms studies, the Hall and Hitchman reports, published in 1952, the Small Calibre High Velocity (SCHV) concept was based on  two assumptions: first, that 90% of all infantry small arms engagements took place at ranges of less than 300 metres; second, that a smaller, lighter calibre would allow a soldier to carry more ammunition for a given weight. The benefit of more rounds carried was the ability to deliver more rounds on target increasing the probability of a hit.

Besides ammunition weight reduction, the other benefits of a smaller calibre were reduced recoil and weapon weight. These made a rifle easier to control helping soldiers to shoot more accurately. Compared to 7.62 mm, a 5.56 mm cartridge weighs half as much: 12 grams instead of 24 grams. Bullet weight is 4 grams for 5.56 mm versus 9.5 grams for 7.62 mm. Recoil energy for 5.56 mm ammunition is 4.7 Joules, whereas with 7.62 mm it is a whopping 16.8 Joules.

The potential downside of a small bullet was insufficient lethality. However, ballistic   research showed that projectile velocity and energy were important determinants of terminal effectiveness. Even very small artillery fragments can kill when they hit a vulnerable part of the body at high enough velocities. Moreover, SCHV projectiles are designed to yaw or upset in soft tissue, which means that the bullet tumbles forward upon penetration to inflict a more serious wound than a bullet that travels straight through a target. As noted above, the proponents of small calibres emphasised that, regardless of calibre, shot placement was the key factor to ensure target effect.

Despite teething problems, overall feedback from early usage in Vietnam suggested that the US Army’s new M193 5.56 mm cartridge was a promising development. Although the small bullet did not always behave consistently and could be deflected by thick foliage, the SCHV concept proved popular with US troops because of the weight savings it provided. Over a ten-year period, weapons and ammunition were refined to unlock further potential. In 1979, NATO held a second calibre competition to select a common SCHV round. The winning Belgian 5.56 mm SS109 / M855 design was able to penetrate a NATO steel helmet at 500 metres. It was also optimised for use in light machine guns. Despite the improved performance on offer, it was still necessary to retain 7.62 mm for long-range machine guns, sniper applications and company-level weapons.

Apart from a few brief skirmishes, the new 5.56 mm NATO calibre was not widely used in combat until 2002. However, soon after US troops began to deploy in force to Iraq, reports began to surface of inconsistent lethality, plus range and accuracy problems. An investigation showed that the primary cause was the US Army’s adoption of the M-4 carbine. This had a 14.5” barrel instead of the previous M-16A2’s longer 20” barrel length. The shorter barrel reduced the velocity and striking energy of the bullet.

In Afghanistan, units frequently found themselves overmatched by Taliban insurgents using full-power 7.62×54 mm Russian and 7.62×51 mm NATO weapons. Typically, the enemy would open fire at ranges above 600 metres. While such fire often lacked precision, it was used to canalise troops into IED kill zones. Any squad equipped with only 5.56 mm weapons would not be able to return effective fire. In some instances, 5.56 mm was not effective beyond 200 metres. Troops equipped with the FN 5.56 mm Minimi Para LMG (M249 SAW), which also had a short barrel, found that it had the same limitations as the M-4 carbine.

Such problems led to the widespread re-adoption of 7.62 mm machine guns and the acquisition of 7.62 mm designated marksman or sharpshooter rifles.  The USA, UK, Germany and other NATO Alliance members also decided to develop improved 5.56 mm loadings. With increased range and lethality, 5.56 mm is now considered to be effective to 400 metres, or 300 metres from short barrel weapons.

In 2009, UK analysis of combat engagements in Afghanistan showed that more than 50% took place at ranges above 300 metres. Although a great many occurred at less than 75 metres, the need to engage enemies beyond 500-600 metres seemed to question the earlier findings of Hall and Hitchman. Those who advocated the adoption of a smaller calibre also failed to consider the importance of suppression. With a reduced signature and striking effect, 5.56 mm simply did not suppress as well as larger calibres, especially at longer ranges.

After more than a decade of continued combat use in Iraq and Afghanistan, the small arms inventories of most NATO armies are now worn-out and need replacing. The key question is what is the future requirement, and whether it encompasses the need for infantry squads to engage targets at 600 metres and beyond? With the future operating environment characterised by urban, littoral and other complex terrains, perhaps 300 metres is sufficient?

Germany, France, Australia, and New Zealand have already begun the process of adopting new small arms. Most nations are adopting a mix of 5.56 mm and 7.62 mm weapons with the smaller calibre used in rifles for short-range work and the larger calibre used in machine guns and sharpshooter rifles for long-range work. However, another important consideration is the need to reduce the infantry soldier’s combat load. While 7.62 mm weapons overcome range issues, re-adopting 7.62 mm weapons has increased the weight of ammunition that needs to be carried. It also imposes a greater logistical burden. For these reasons, the USA is going down a different path. It is evaluating alternate calibres to see whether a single intermediate cartridge, between 5.56 mm and 7.62 mm, can replace both at platoon- and section-level.

Over the years, many armies have conducted calibre studies. Almost all have concluded that the ideal military calibre to deliver 600-800 metre performance lies between 6 mm and 7 mm. Some countries have gone a stage further and developed prototype intermediate calibre prototype ammunition including the following:

Modern intermediate calibre options deliver increased range in a smaller package by having bullets that are more aerodynamically efficient. Such projectiles lose energy less quickly than legacy ammunition types. Whatever is adopted, the challenge is to increase range and target effect without substantially increasing ammunition size, weight and recoil. 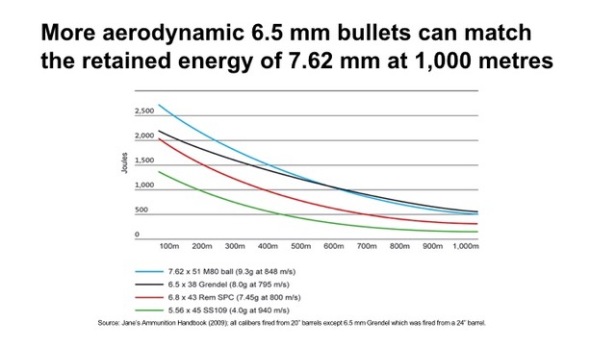 If a new calibre is too close to 7.62 mm in size, shape and performance, it may be simpler to stick with 7.62 mm. If, on the other hand, it is not significantly more capable than existing 5.56 mm ammunition, then it will not be able to substitute 7.62 mm.

As the debate continues, a new requirement has emerged. This is the need to defeat advanced Level IV ceramic body armours. It may well drive NATO armies to re-adopt 7.62 mm or to acquire a calibre that is more powerful than 5.56 mm.

As cased-telescoped cartridge technology matures and steel, polymer and other lightweight versions of legacy brass cases emerge, a larger calibre cartridge could be made to weigh only marginally more than an existing 5.56 mm brass cartridge.

05 – The Automatic Rifle versus the Machine Gun

One of the major changes introduced by the adoption of 5.56mm ammunition was that every soldier in an infantry section now carries an automatic weapon. In addition to this, many NATO armies also adopted a dedicated 5.56 mm light machine gun (the FN Minimi / M249 SAW). A problem is that when every section member fires his or her weapon on full automatic, ammunition consumption increases dramatically.

With the range concerns described above, plus the ineffectiveness of 5.56mm machine guns beyond 400 metres (or, in some situations, beyond 200 metres) many armies have now returned to sections and platoons equipped with a mix 5.56mm rifles and 7.62mm machine guns (FN MAG58 / M240). In general, 5.56mm weapons are used for short-range combat and 7.62mm weapons for long-range engagements. Furthermore, many armies have also acquired Designated Marksman Rifles (DMR) used at section-level.

Riflemen fire single aimed shots while machine guns are the focal point for automatic fire. This provides infantry with good organic firepower, but conserves ammunition. This is in-line with German Wermacht, US Army and British Army doctrine from the 1930s to the 1980s, which advocated infantry sections and platoons built around machine guns. However, the wider re-introduction of 7.62mm weapons has increased overall weight burden for dismounted infantry. The adoption of an intermediate calibre machine gun would offer substantial weight savings for both weapon and ammunition.

Such a hypothesis is driving the US Army’s Next Generation Squad Automatic Weapon (NGSAW) Program. A cased-telescoped machine gun firing a 6.5mm projectile that matches 7.62mm performance at 1,100 metres in a 5.56 mm package would provide significant overmatch performance versus legacy systems as well as versus the small arms of potential adversaries.

To validate the many assumptions about intermediate calibres, the US Army and US SOCOM are evaluating several advanced ammunition technologies and intermediate cartridge designs. It would certainly be worth the UK developing alternate calibre prototypes if only to build a robust fact-base that informs future choices. Whatever is finally selected, let’s hope it finally give infantry soldiers what they need, at least until a phased plasma weapon in the 40-watt range is available.

18 thoughts on “The Case for a New Military Calibre”